There has been a mill on the present site on Warm Springs Run in the heart of Warm Springs, Virginia, since 1771. The present mill building was built in 1900 and operated until 1970 when it became home of the Waterwheel Restaurant. The building is now listed as a National and Virginia Historic Landmark. The mill has retained most of its interior and exterior features intact, so it's a virtual museum of milling machinery. The water-powered gristmill produced stone ground flour. The nearly 20-foot wide Fitz water wheel rests on a massive wooden block that rests on an eight-foot high stone pier.

The partially excavated cellar (now our wine cellar) contains much of the original millworks. A ten-foot wide vertical face wheel with wooden teeth is engaged to the horizontal lantern pinion wheel. The latter transferred the direction of the drive from horizontal to vertical and increased the speed of the millstone spindle compared to the slower motion of the water wheel shaft. The leather belts and wooden chutes of the grain elevator system are also still extant and are in good condition. 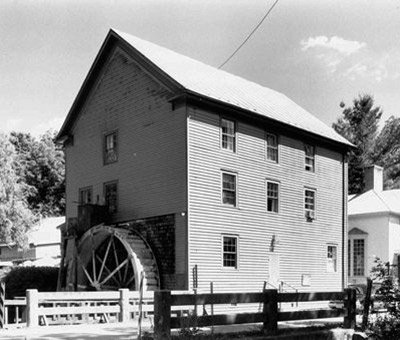 Circa 1973, shortly after the mill was renovated 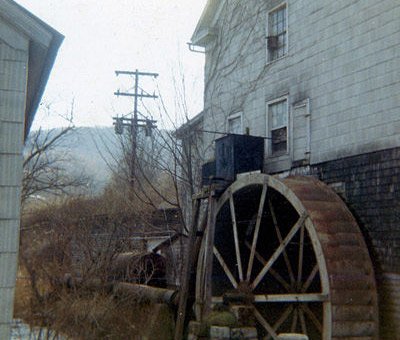 Circa 1970, shortly before renovation, still a working mill
The first floor, now a dining room, is divided into two areas by a marked change in floor level. On the upper level is found the mill-stone in its wooden vat, which in turn rests on a large square granite slab bolted to the floor. The slab is notched with a meal spout connecting the vat with the lower level. A metal label on the south side of the vat identifies its maker: B.F. Starr, Baltimore, Md., Mill Builders and Furnishings, Reground and Re-corrugated Rolls. A wooden "horse" or frame supports the wide wooden hopper with damsel, which regulated the flow of grain coming from the two wooden chutes connected to the grain bins on the second floor. To the left of the mill stone is the large stone crane with screw jack used to lift and place the mill stones. A series of seven wooden grain elevator chutes, each with its own leather belt, scoops and glass windows, forms a wall dividing the millstone vat from the east side of the upper level.

The elevator system was an important component in the automatic operation of the mill. Run by the action of the waterwheel, it elevated the grain mechanically to the top of the mill, cleaned it during gravity transmission to the hoppers, conveyed it to the top of the mill again and then cooled, bolted and barreled it during its second descent without the intervention of any manual operation. The former miller's office, now the Simon Kenton pub, is located at the southeast corner of the lower level. 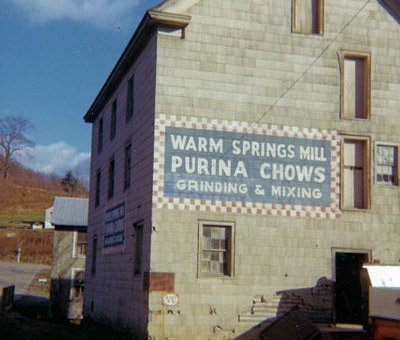 Read the newspaper article about the renovation of the mill and creation of the Inn at Gristmill Square. 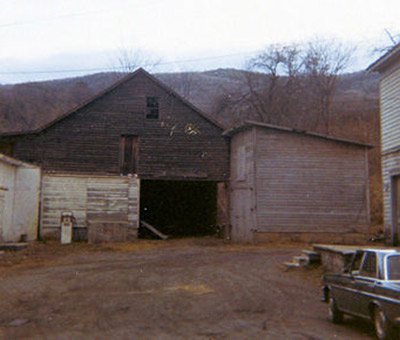 Circa 1970, the square showing the old barn
(now the office), shortly before renovation.
The most noted personality associated with the mill is pioneer Simon Kenton. Born in Virginia in 1755, he left his Tidewater home as a young man of 16 to hide out as a fugitive from justice. He loved a beautiful girl, but she loved another. Kenton and her suitor met in combat over her and Kenton fled as he believed he had killed his rival. In 1771, he located Jacob's Butler's mill on the edge of town and was employed briefly.

The inn was created in 1972 utilizing five original 19th century buildings. A converted blacksmith shop houses the two guest rooms. The old hardware store provides space for seven more guest rooms. The Steele House, a once private residence, houses four guest rooms, the former home of the miller (now known as The Miller House) has another four guest rooms, and our latest addition (added in 2016) is known as the Payne House.  The Payne House is home to the office/front desk and gift shop, and the Turley Suite.